President John, his wife Sheila and myself, set off early for a visit to Barlow Primary School this morning.    We were greeted by Rtn Jill Bethell and othermebers of Drone Valley, who have been involved for some time with Barlow Primary School and were resonsible for introducing the DARE (Drug Abuse Resistance Education) programme into the school.  We watched as Senior DARE Officer, Kathy Cross delivered a short lesson to a class of year 6 students.

Pres. John and I were able to talk individually to the children about the work they have been doing with the scheme.  Listening to them explain why they would make there decisions about their personal safety was most inspiring.

After leaving Barlow it was a quick trip over to Dronfield to Stonelow School, where President John and I handed out work books to a class of children who were about to undertake the Rotary Junior Community Award Programme, again sponsored by the Rotary Club of Drone Valley.   The children were discussing what aspects of Community work, of Social Experiences and of personal skills that they would be undertaking during the programme which culminates in summer 2013.

After the classroom visit, four of the children were allowed to take us on a tour of the outside facilities at the school, including a pond, allotments, soft fruit growing, a woodland walk with "hedgehog hotels" and lots more.

It was a really fascinating and interesting visit.

Leaving Dronfield we headed south to Matlock Bath, where we had  an absolutely delightful lunch at The Heights of Abraham.  We were met at the Heights by Assistant Governor John Shipman, his wife Sue and The Head of marketing for The Heights of Abraham.   Hon. Rotarian Andrew Pugh, the owner of the Heights really wanted to be present for the visit but business commitments meant he could not join us.  Also present was President Peter Wigglesworth from the Matlock Club.

This engagement signalled the end of the visit by President John and his wife Sheila and they left us mid afternoon to drive to Stamford for the next stage of their duties. 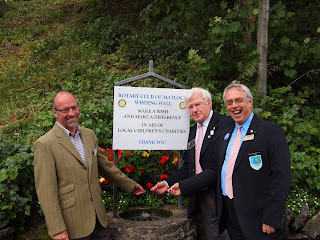 Rotary Club of Matlock's Wishing Well
My sincere thanks to everyone who took part in the visit and helped to make it the success that it was.