The day started with a lunchtime visit to the Interact Club of Pingle School, Swadlincote.     This club was formed only a matter of four or five weeks ago.   The Club President, Seb Coe, suffers from Autism, but he is making a fantastic job of presiding over the club, which already has over 25 members.

At the club I met Colin Gel, The local Assistant Governor, Terry de la Fuente, Rtns Kim and Rob Coe and Rtn Pat Murray.     I believe I am right in saying that Kim and Rob who only joined Rotary this year were the drivers behind the creation of the Interact Club.

I was asked to give a short presentation on Rotary which of course I was delighted to do, involving Colin in the talk as well.

President Seb recognised one of the Club's members who had only the previous day been given an award at the local, Burton & District, Children of Courage Awards.   He also  made a number of announcements about the forthcoming activities of the club including a forthcoming litter pick, a meeting of their Charter and Charities Committee and several other things.  It was clear that the youngsters enjoyed what they were doing and that with experience the club will become more and more successful.

My congratulations to everyone who have been concerned in its creation.

After a bit of time off in the afternoon, when I took the opportunity to write a speech for my visit tomorrow to the Charter Night of the Rotary Club of Hope Valley, it was off to my own Club for their normal weekly meeting.   It turned out to be more than just interesting.

At the start of the meeting the Club President, Graham Wright introduced visitors to the Club.  They were Andrea Fox, a regular visitor to the Club, Rotarian Bill Monks, who although he lives in Belper is a member of a Rotary Club in the Solomon Islands where he works and Terry Harris-Ellis, the son in law of Rtn David Harris.  Terry was our speaker for the night.

After a delicious meal we came on to the business part of the meeting.   The programme had to be adjusted to accommodate the early leaving of Rtn David Henson.   The reason the programme had to be adjusted was that David was to receive a Paul Harris Fellowship.   David has been a really active Rotarian since he joined in 1996 and has served as the Club Treasurer for a number of years.  Last year David took on the role of District Conference Treasurer at my request, a job he did to perfection.

Also surprised by the award of a Paul Harris Fellowship was Andrea Fox, who had been invited on the pretext that we had a number of visitors and would she like to join them.    Andre set up the Drop Inn  for youngsters in Belper about 13 years ago and has been involved in its management ever since that time.   The Drop Inn are currently offering training facilities for youngsters who have been excluded from school on multiple occasions and are considered by the Authorities to be "uneducatable".  Andrea is proving them wrong.

One of the proudest moments of my year as the District Governor, involved not me, but my wife Gail, who has been at my side throughout the year.  She was equally surprised to receive the award of a Paul Harris Fellowship for the work she has done at the club and within the District over recent years.   Gail, for once was lost for words and was overcome by emotion by the occasion.    It was only when she had received the award that she realised why our daughter Sarah had appeared at the meeting moments beforehand.

The next item of business was my thanks to all the club for the tremendous support they have given me during the year.  I said that I had initially planned to present the club with an item of equipment, but had gone off that idea as really the club had all the equipment it needed.    As a result I had had manufactured a set of bone china mugs printed with the names of all the club members, the Rotary logo and a message from me.    I handed one to each member present.  President Graham thanked me for the work I had done as DG.

The last item on the agenda was the drawing of the raffle.  Pres. Graham asked our visitor Bill to make the draw, which he did.   Unfortunately the drawn ticket was not held by anyone present, so Andre drew a second one - with the result that Rtn Bill Monks went away with the bottle of wine.

It was a great day - one of those days that makes you realise why you are in Rotary.  Thanks to all concerned. 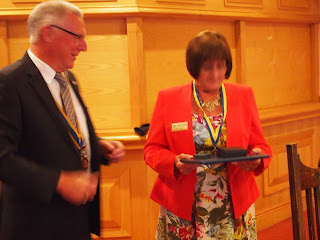