The Sacheveral Suite at Morley Hayes was the venue for the 90th anniversary Charter celebration by the Rotary Club of Ilkeston.  Gail and I had been invited to attend several months ago but unfortunately on the morning of 17th Gail was unwell, suffering from bronchitus and a chest infection.   A quick phone call however soon located someone to stand in and act as my consort for the evening, my eldest daughter Nicola.

We were picked up by Rtn David Henson and his wife, Elizabeth and arrived at Morley Hayes just in time for the celebrations.    Hilary Surga and Alan Widdowson also  from my club, Belper and Duffield were also there.

President Mike Perry proved to be a very gracious host, together with his wife Pauline.    All guests received a glass of wine on arrival and were enteratained by "Top Brass".

Following the formalities entertainment was provided by "Park Royal" who proved to be an excellent band, providing musical entertainment till midnight. 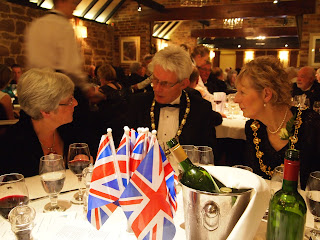 Fellowship round the table
My thanks to President Mike and the Rotary Club of Ilkeston for the evening which was excellent.     My thanks also to David Henson for providing my transport.
Posted by Unknown at 00:05