About 75 Rotarians and guests attended the Littleover Lodge Hotel in Derby on the evening of 19th April to celebrate the  28th anniversary of the granting of the Charter of the Rotary Club of Church Wilne.    Rtn John Scotney from my club picked me up at home and accompanied me to the Charter.

We were warmly greeted by a number of Rotarians and the President, Derek Sheehy-Smith.   After a delicious and well served meal the traditional speeches followed the similarly traditional Roll Call of clubs and members present.

The speaker for the event was comedian Bob Webb ( a Londoner from Cardiff ! ) whose style of humour had the audience in fits of laughter and not a blue joke amongst it.

Many thanks to President Derek and to the members of Church Wilne for inviting me and for their subsequent hospitality and friendship.   Thanks also to John Scotney for taking on the role as driver. 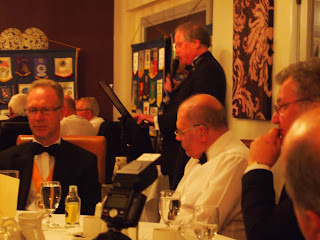