A Charter with a difference - 16th February

For my third Charter evening in three days Gail and I set off with Rotarian Alan Widdowson (driver) and his partner Rtn. Hilary Surga for the Oblensky Hall at Trent College at Long Eaton.   The hall (normally the dining room for the students) had been converted into a 1950's diner for the Charter celebrations of Long Eaton Dawnbreakers.

Never a club to go with the traditions of others, they have created their own by having a fancy dress charter.   This year the theme was the fifties.   Dress code was a choice between formal and fifties.   I chose the safe option whilst Gail went for the fancy dress.    I have to say it was great to see so many Rotarians dressed up to the nines in a wide variety of fifties gear.

President Simon Davey, in his 50's gear, presided over the proceedings.  He also produced the menu folders, table decorations and a plethora of signs and other things. 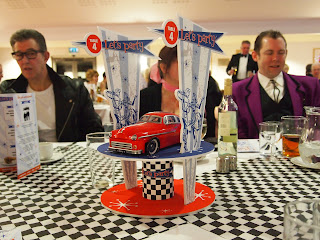 Unusually for a charter we had onion ring, chicken wings, ribs abd dips for a starter, chicken meat balls and spicy 3 bean chilli for a main and more conventionally apple pie and custard for afters.

Entertainment was supplied by the winners of a recent, "Long Eaton's Got Talent", a band of young lads, called "I Surrender".  The youngest was twelve and the oldest was I belive 16 years.   I swear the bass guitarist was smaller than his guitar, but they made a great 50's and 60's sound - wothy of any Rotary concert and available for bookings through Rtn Paul Rose, Rotary Club of Ripley.   They were supplemented by a disco.

Before the entertainment started I assisted President Simon to present "The Dawnbreaker of the Year" award.  This year it went to Rtn Martin Brinkley, their Hon Sec.    Also to receive an honour during the evening was Vice President Paul Burrows who was presented, much to his surprise with a Paul Harris Fellowship. 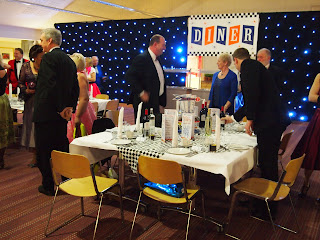 Many thanks to President Simon and all at Dawnbreakers for a great night out.  Also thanks to Alan and Hilary for taking us.
Posted by Unknown at 13:04