Lunchtime on Sunday 20th January saw Gail and I, accompanied by Rtn David Partridge and his wife Sue, driving over from Belper to the Nottinghamshire Golf and Country Club for a Sunday lunch to celebrate Bingham and District's 38th Charter Anniversary.

We attended at the invitation of President Andy Vose and sat with Andy, Claire his wife, The Mayor of Rushcliffe and his wife, Mr Stephen Wardle a consultant from the Neo-natal Unit at QMC and Lizzie Wright a fundraiser from the hospital.    The atmosphere round the table and across the room generally was very convivial and relaxed.

President Any had brought a number of members of his family along with him and it was great to see his young daughters, Isabella (7 yrs)  and Evie (2 yrs), enjoying the occasion.

After a very tasty, well prepared and well served three course meal, PDG Rex Barnett did the roll call of clubs.   There then followed the toast to Rotary International, proposed by President Elect Maureen Stockwood, to which I duly responed, before proposing the toast to The Rotary Club of Bingham and District.

When it was President Andy's time to respond, he had just started speaking, and used the phrase, "So here goes" to which Evie immediately responded by saying, in a voice loud enough for the whole room to hear, "Here he goes" which almost brought the house down.

Stephen Wardle then spoke about the work of the neo-natal unit and how they need charitable funds to help them deliver the best possible service to babies and their families in the care of the hospital.

It was a really pleasant event and I would particularly like to thank Andy and Claire for their company.  My thanks also go to David and Sue Partridge for providing Gail and I with transport for the day. 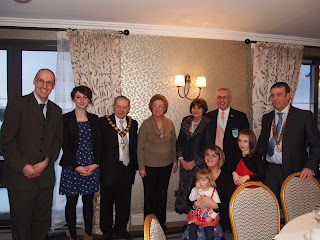 President Andy, his family and guests 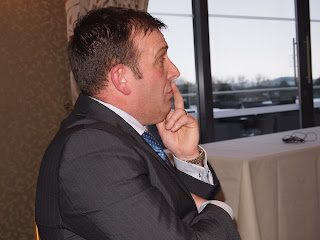