Now into my last month as the District Governor and the event this evening, a Folk Evening in the Village Hall at Youlgreave was an event that had been organised as part of a Caravan Rally arranged by the International Caravanning Fellowship of Rotarians, of which I am a member.  Gail of course joined me for the evening.

In fact I have thought of attending this rally but in the end could not manage it with my other commitments.   The actual evening had been organised by Rtn Terry Fox, Rotary Club of Matlock.   The evening, which cost the princely sum of just £12 consisted of a folk concert to start with, followed by a supper of homemade pie and peas.   After the break and the drawing of the usual raffle (in which Gail won two prizes !!) there was a traditional barn dance style dance.   This was great fun and everyone took part in the dancing.

Unfortunately quite a number of those present - all the caravanners - had to leave shortly before 11pm as the site on which they were staying closed its gates at 11pm and if they had not got back they would be locked out.

Assistant Governor John Shipman and his lovely wife Sue were present for the evening and John took a shine to my dancing shoes.    Comments on a post card please. 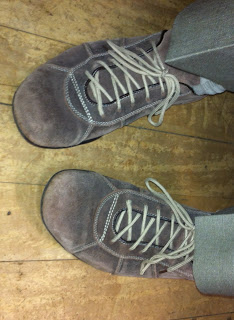