It's been a fairly quiet weekend, with just a meeting with David Pdlar to discuss the District Conference brochure layout etc on Friday afternoon and a free day on Saturday.

On Sunday 5th July I joined several others, Rob Gray, Terry Leivers, John Lewington, Sandra Morrey, Steve Lawes, and David Hood (I'm sure I've missed one out but can't think who - suggestions please.) to interview candidates for the forthcoming Group Study Exchange visit to Nepal.  We had nine candidates to choose from and of course we were only looking for four.

The standard of the candidates was so high that we could have easily selected two teams, however, we could only choose one team so nine candidates will be .     I will not mention who got through until everyone has been personally informed of the results.

After leaving Bingham where the interviews were held, I went to the Riverside Festival at Nottingham.   It was a really pleasant, sunny afternoon and the crowds were out in force.  The Rotary Clubs of Carlton and Trent Bridge were also out in force selling tickets for their Duck Race, which took place at 4.30pm.

I will not mention the names of the Rotarians who were there, as I would without doubt miss someone out.     As 4.30pm arrived, the sunny sky changed to heavy, black clouds. Just as the ducks were released from the suspension bridge, the heavens opened and there was thunder and lightening and one of the heaviest downpours of the summer.   Needless to say, by the time I had walked back to the car (or rather ran) I was absolutely soaked - ah well its all for a good cause. 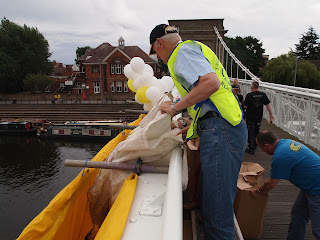