A busy day today.   Accompanied by Rtns Alan Widdowson and Hilary Surga from my own club  Gail and I set off in the morning for the Children of Courage Awards hosted by the Rotary Club of Mansfield.    They have been running this event for over 20 years now and it is really heartwarming to attend.

With ten young people receiving awards it was time to get out the tissues.   The awards go to young people with either physical or other disabilities, young carers or those who have overcome extreme adversity.  They were each nominatedby their school or a local organisation to which they belong.  It was great to be there to see them receive their awards and to see the looks on their faces (and their parents)

Rtn Stewart Rickersey was responsible for organising the event and did a tremendous job, as did President Paul Bacon who presided over the whole event.

I felt priviliged to be asked to sum up at the end of the presenatations.

Can't wait for next year's event.

From The Civic Centre at Mansfield we travelled over to Newark, where in the evening we attended the Charter celebrations of the Rotary Club of Newark Castle.     President Glen was an absolutely charming host for the evening and it was a really fun and laughter filled evening.  After dinner and the usual toasts enetertainment was provided by Dee Whitehead, a singer untill it was time to leave.

President Glan presented Paul Harris Fellowships to three members of the club, all of who seemed to be amazed that they had received the honour.  My congratulations to all of them.

The weather at Newark was very thick fog so we were very pleased we had booked into a local hotel for the night, rather than driving back to Belper in a bit of a pea souper.

Thanks to all concerned for making the event such an enjoyable experience. 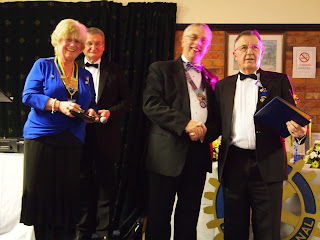 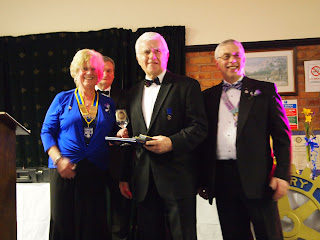 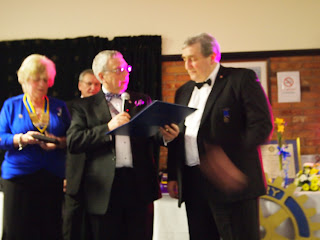