This evening was the occasion of the District's 33rd Annual Foundation Link Evening, a significant event in the District calendar.   There seemed to be about 150 persons present for the evening, held at the Civic Centre at Mansfield.

Don Mackenzie acted as the Master of ceremonies for the evening which had been organised by Terry Leivers.

Terry had organised the event to include contributions from as many previous District Foundation Committee chairmen as possible, Don being one of them.

After welcomes and introductory remarks by Terry, and a thought for the day by Val Leivers, we sat down to a tasty and efficiently served two course meal.  Following this David Crowson proposed the toast to Rotary Foundation.   Michael Guest then entertained us with some thoughts from the past, before Hon Rtn Colin Slater (of radio Nottingham fame) took the stage to interview the current team of Ambassadorial Scholars - Courtney Rachal, Mayumi Naguchi, Hiroko Sakate, Pawel Smietanka and Isabelle Affentranger, along with GSE Alumni Matt Mitchell, Sandra Fong a Peace Fellow at Bradford and Rtn Brian Cane another past Rotary Scholar.     The interviews were both entertaining and informative and thanks to all concerned.

AS an addition to the published programme during the evening, IPDG Gordon McGlone presented PDG Val Leivers with a "Rotary Service Above Self" Award.  This is a great honour for Val and the District as it is only awarded to a maximum of 125 Rotarians per year, world wide.    many congratulations Val - you deserve it.

I was then allowed to say a few final comments on the evening and thanked everyone concerned for such a great evening.    I also expressed my hope that with the changes to Foundation we will be able to find a suitable format to showcase Foundation activities in the future. 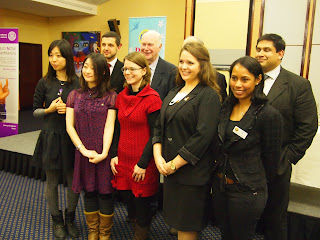 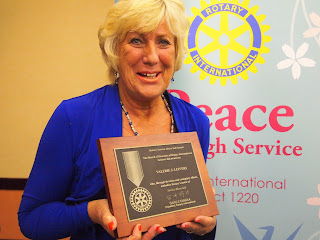 The final toast was given by Peter Swift.

An excellent Rotary evening.
Posted by Unknown at 05:24