The Hospice to Hospice walk started this morning at Chesterfield, where we finished last night.   As well as myself, Owen Briggs, Andy Ledbetter and Kevin Brown who are trying to do the whole four days we also had Rodger Heathcote and Clive Robbins walking with us from the start today.  Phil Stone from Ilkeston also joined us today, fresh from a holiday in Teneriffe where he did 27 km to make up for not being able to walk with us yesterday.   As well as the Rotarians doing the walk we were also joined by half a dozen lady volunteers from the Bluebell Wood Hospice who supported us by walking through Chesterfield with us.

Sean Murphy, husband of Eileen from my club provided the back up car for the day.

The walk from Chesterfield over to Matlock was quite hard going with lots of hills to go up and down, including of course that well known hill, Slack Hill.   The weather was kind to us again today with just a single brief shower to contend with.

We arrived at the Temple Hotel at Matlock bath a little later than scheduled, but were greeted by the Matlock President Peter Wigglesworth and a number of members. and wives of members of the club - Oh and Peter's dog, Jack.

Rodger left us at Matlock and Peter and we were then joined by a number of others for the afternoon session.  These included, Pam Harrison the wife of Noel Harrison from Sherwood Sunrisers and Eileen Murphy from Belper and Duffield.

The afternoon walk, started along the A6 to Cromford where we dropped onto the canal path alongside it all the way to Ambergate.  Along the way we picked up some new walkers, my wife Gail and Liz Wright the wife of the Belper and Duffield President.       As we reached Ambergate we were also joined by Paul Taylor from Belper club - one of our older members.  It was great to see Paul coming out to support us.

Also joining us as we neared Belper was my daughter Nicola and her husband Chris together with their two children Maddie and Francesca with balloons and banners to let our entry into Belper be well publicised.

When we arrived at Belper members of my club had laid on a buffet for us at the Strutt Club and many of them were there to welcome us - along with some very appropriate music - courtesy of Alan Widdowson of our Club.

When we arrived back home I managed to climb into the bath for a nice soak and then at about 8.30pm went straight to bed, leaving Gail to entertain our guest, Kevin for the remainder of the evening.

Overall the day was a great success, if a bit painful.  I ended up with a couple of blister that are quite sore and  Kevin has been taking some painkillers for pain in his knees.     We will however be there to do it all again tomorrow.

My sincere thanks to everyone who has taken part in the walk either by walking, raising funds, providing back up, laying on the buffet etc etc.     Also, sincere apologies to anyone who I should have mentioned and haven't - I put it down to fatigue.

Tomorrow we are walkiung from Belper to Long Eaton, via Ilkeston.  Do feel free to join us en route and cheer us on. 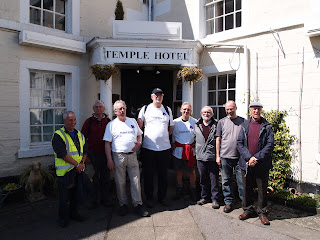 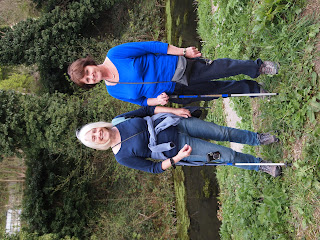 Gail and Liz - ready for the off﻿ 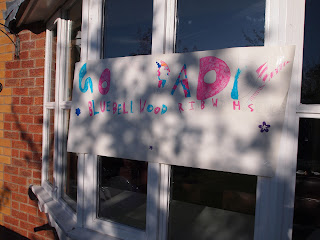