The final leg Monday 6th May

It was an early start this morning with the alarm clock set for some unearthly hour.   Gail and I  were due at Cafge Zing at 8am, but before going there we wanted to call round at my daughter Nicola's house to see the four lads who had volunteered to ride the 100 miles plus, from Belper, to Bluebell Wood to Rainbows - all in support of the same cause.  The plan was that they should arrive at Rainbows about the same time as the walkers.

They were due to leave at 7.30am so we arrived in time for that.   They all gathered and the usual photos were taken before we wished them well and set off for Long Eaton ourselves, picking up Owen and Carey on the way.   We were a few minutes late arriving for breakfast at Cafe Zing (which the owner had opened specially for us) and it was already almost full of Rotarians and other supporters from RC of Long Eaton Dawnbreakers.

We each ordered and ate a "full English" - apart from Owen who ordered a full English but ate the "whopper" version accidentally ordered by Andy.    Cafe Zing and Dawnbreakers both did us really proud.   Simon Davey, President of Dawnbreakers also presented us with a whopper - a cheque for £250 towards the fund.  This (and the breakfast) set us up well for the last leg of the walk down to Rainbows.

The regular walkers this morning were joined by quite a number of members of Dawnbreakers and others including Steve Lawes and Roger Summers, and we set off at a steady pace for Trent Lock, where there was of course a difficulty to overcome.   The river.   We had to cross it.   No problem.  Rtn Roger Sissons had arranged for the local sailing club to provide their safety boat to take us across four at a time.

This proved quite an adventure, especially for those who "don't like water" or "don't like sailing".   The District Sergeant at Arms, Owen (6' 5" tall and built like the proverbial brick outhouse being a case in point.   He was gripping the sides of the inflatable boat so hard I thought his fingernails were going to burst it !

On one of the crossings we did have to carry out a genuine rescue mission, as we recovered (still intact and in good health) a small teddy bear accidentally dropped into the water by a young boy on a bridge over the cut.   The two were happily re-united shortly afterwards.

Following our water borne expedition it was back on foot for a few miles alongside the River Soar.   Once we left that we headed for a small pub where we peruaded the management to let us eat our sandwiches if we bought our drinks from the establishment.

After half and hour's lunch and with some of the Dawenbreakers leaving us for other comittments the remainder of us walked on into Loughborough, unfortunately along the main A6.   The sun was baking hot - apparently the hottest day of the year - something I can personally confirm.

As we came into Loughborough we set off through the residential area to Rainbows.    For the last mile or so we were met by Rotarians Stella and Mike Herbert.  Through illness Mike is now in a wheelchair and Owen pushed him the last mile to Rainbows.  This was a great and emotional moment for me as Mike and I have quite a lot in common and began working on District about the same time.    Stella and Mike - thanks very much for joining us it meant a lot.

As we neared the hospice - less than 50 metres to go Steve Lawes in passing conversation said to me, "Wouldn';t it be great if the cyclists turned up now?"   Almost before I could reply, I glanced behind and saw the lead cyclist just joining us.

We were then able to walk/ride into Rainbows together, following Gail and Carey in the support car.  We were met by rapturous applause from staff, volunteers and residents of Rainbows, bunting and cameras everywhere.   What an absolutely great moment, one I shall not forget for an awfully long time.

Caroline Rossin had laid on a cream tea for us and during a short speech announced that the Hospice intended to place a glass brick in the wall with brief details of the walk to commemorate the event for ever.

Not sure how much we will have raised for the two hospices, but I am hopeful, confident indeed that we will make our target figure of £5,000.     Just as important however was the friendship and fellowship that was created between Rotarians, non-Rotarians and Clubs by taking part in some small or large way.     My sincere thanks go out to EVERYONE who was involved in any way shape or form - Rotarians and Non-Rotarians alike.  It was a fantastic four days. 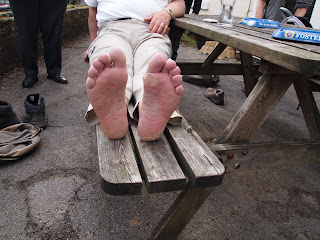 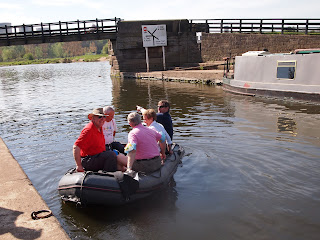 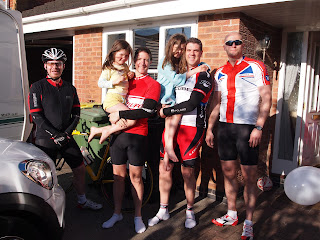 Nog, John, Chris and Craig preparing for the ride 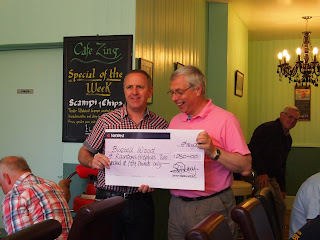 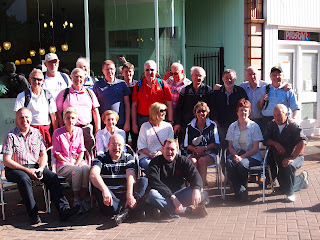